Easter has come and gone, and the Grime scene has been as busy as ever! Welcome back to Keepin’ It Grimy’s Weekly Wrap Up, your one stop shop for everything Grime, check out our list below for everything you might have missed over the last week.

Off the back of their massively successful album ‘Norf Face‘, the collective made up of Frisco, JME, Shorty, and Capo Lee were featured in the first-ever size? sessions x Rinse FM collaboration set to perform tracks from the album. The set is fully charged from the get-go, with each MC building off of each other’s energies and living up to size?’s description of the crew, calling them “representative of the sonic power of four pivotal UK artists linking up“.

After months of anticipation and single releases, Crafty893 has finally blessed the Grime scene with his debut album ‘Smart Dumb‘. The project is filled with 10 tracks that radiate various energies, from the self-reflective and more subdued tracks ‘My Headspace – Freestyle‘ and ‘Top Ten‘ featuring Manga Saint Hilare to the high-spirited ‘Wotless‘ (which is the only track not produced by Crafty893, with the responsibility instead being handed to Sir Spyro) and ‘Back It‘ featuring Big Zuu, with Crafty also including “professional re-releases of songs from my old mixtapes/EPs ‘Not Bad’ & ‘Dumb’ “. Speaking on the range of styles present in ‘Smart Dumb‘, Crafty says “This record showcases all the different sides to my production and bars – and is a progression of where I’m at now”.

Reaching back to late 2020’s ‘D.O.N’ (‘Double or Nothing‘),  the Newham General D Double E has released a lively music video for the opening track ‘Contact Us‘. Chock-full of cameos, the visuals show D Double trying (and ultimately failing) to live life as a train ticket inspector, until he stumbles through smokey carriages and joins in on the disorder taking place. With ‘Against All Odds’ directors Nicky Slimting and Femi Oyeniran to thank for their directing prowess, the video perfectly captures the flair and unique style that gave the track its renown as the opener for the ‘D.O.N‘ album.

Veteran Grime MC Narst (formerly known as Lil Nasty) has called upon Durrty Goodz for their powerful new track titled ‘Boyz in the Hood‘, alongside a fresh music video directed by Leon x Wavey. Kicking off with a flashback to the pairs’ younger days (backed by a sample of Nitty Gritty’s ‘Trials and Crosses‘), the video goes on to show that the duo are living lavishly 20 years later, celebrating their successes with cards, drinks, and friends – thriving despite the risk on the roads. The Grime icons both bring their energetic flows to the high-powered track, making it clear that they still have the skills that got them the revered status they have.

Continuing to work tirelessly throughout 2021, Nasty Jack is back with yet another music video, this time with a ruthless offering called ‘Real Mash Man‘. The melodic piano opening leads to a dark instrumental, where Nasty Jack unleashes his flow while asserting his dominance in his bars, even during the unexpected RnB-inspired interlude. Adding to an increasingly long list of collaborations alongside videographer Flash Spacey, the visuals have Nasty Jack comfortably bopping through the backroads of West London.

Although Ghetts has released the dates to his upcoming ‘Conflict of Interest‘ tour, fans are still yearning for more content from the Plaistow icon. Recognising this, Ghetts has announced a live-streamed show, where he will perform tracks from the album in, what he promises to be, “cinematic fashion” thanks to director Charlie Sarsfield.

Come and bear witness… And imagine what it’s like when you’re able to be here with us.

Conflict of Interest is being performed in stride cinematic fashion, directed by @charlie_______s pic.twitter.com/fJ25qgQ6JY

With the release of their powerful track ‘Bills to Pay‘, the veteran MC trio of Sharky Major, Discarda, and D Power Diesle got together for a cinematic music video. Filmed and edited by Das Können, the three veterans masterfully navigate through the track in a well-lit warehouse setting, fully kitted out in Grime Originals clothing. To read more about the ‘Bills to Pay‘ video, check out what we had to say HERE.

Brixton native and Grime icon Big Narstie has teamed up with BBC Sounds to present an 8-part podcast to honour the 40th anniversary of the Brixton Riots.  The series will explore the factors that led to the riots, including the rise of the National Front and the New Cross Fire, while also including interviews and performances from Black British Talent. You can check out Big Narstie‘s breakdown of the series below and then the first 2 episodes of the podcast HERE

Veteran South London duo Brakeman and P Money have teamed up for ‘Jeepers Creepers‘ – a pounding Grime banger produced by Iron Soul. The instrumental makes use of haunting, high-pitched synth stabs (which are reminiscent of the famous violin shrieks from the ‘Psycho’ theme)  throughout, with Brakeman unleashing a savage opening verse and a catchy hook before P Money enters the fray with his hard-hitting bars delivered with his signature flow.

Dropping very recently (Friday evening!) Footsie has taken a step back from classic Grime to bring us a chilled, vibey EP titled ‘Wavedown Section‘ that perfectly ushers you into the weekend. Despite the majority of the 4-track EP trading the usual aggressiveness and jagged edge of grime for soothing synth chords and subdued flows on tracks such as  ‘Quik 1‘ (featuring Manga Saint Hilare), Footsie makes sure to sneak in a reminder that he is still ‘that guy’ with the track ‘Wave Down‘ (despite the soulful hook provided by KEEPVIBESNEAR). Produced by Harvey Whyte, the summer vibe is prevalent in every track and perfectly represents the atmosphere we’re all feeling after enduring 2020 and early 2021.

Swarvo has returned with his latest EP ‘Grime Sport Vol.2‘, the second instalment of the ‘Grime Sport’ series after dropping the first edition in 2019. The veteran drafted in heavyweight producers Jakebob, IZAMIK and Sofasaur on instrumental duties and, of course, a bag of skilled MCs – Joe Fire, Scrufizzer, Mez, and K9. The EP is masterfully crafted and impossible to listen through without multiple reloads, with the passion and fire for Grime prevalent in every track.

Having released the audio to ‘Hustle & Bustle‘ earlier in the month, PK gifted us with visuals to go along with the track! The YGG member takes to the streets to deliver his direct bars and catchy hook over the Jay Goodz beat, showing his unwavering dedication to the grind.

With the most recent edition of Alfred Bronson‘s IGTV-exclusive freestyle series ‘Bronson Bars‘, Renz took to the mic to unleash a savage freestyle over a DJ Iyayi instrumental, with his signature ad-libs to boot, while sending shots at other MC’s in the scene. Bringing his trademark flow to the series, Renz brings the aggression and fire to the freestyle that’s reminiscent of the atmosphere of ‘classic’ Grime. CLICK HERE to see what more we had to say about Renz’s Bronson Bars freestyle.

The highly awaited joint EP by the Female Allstars (made up of Miz, Frankie Staywoke, NyNy, and Lady Shocker) and JME has finally dropped in the form of the three-track ‘What You Call Disss?‘. With production from Modest Jamez, the three tracks show the evolution of the all-female collective despite their relative inexperience compared to the legendary BBK co-founder, showing that they can hold their own as they ring off punchy verses and let JME deliver infectious hooks.

Chowerman dropped a drill-enthused offering titled ‘Ugly‘ featuring Kabz and Razor. Having frequently been seen together on radio sets and at shows, ‘Ugly‘ marks the first time the Over The Edge collective have collaborated on an official release, and the chemistry between the three is evident. Bringing Grimy flows to the drill instrumental, the trio spit about the harsh realities of life that they had to face, with Chowerman delivering a direct and impactful hook, asking ‘How you gonna cope when life, it turns ugly?“.

Dropping the audio for ‘God Mode‘ last week, Lady Shocker, Funky Dee, and Pre Wavy have linked up with Vuniverse Media to give the track a visual treatment, which shows the three in a studio session, which turns into an impromptu set with multiple cameos from familiar faces such as Frankie Staywoke and K9, amongst others, while everyone takes in the infectious energy of the track.

Previously released as a BandCamp exclusive, Jakebob‘s instrumental ‘Hymn List‘ was given a vocal cover by South London MCs Ten Dixon and Jon E Clayface. The instrumental has previously turned many raves and radio sets upside down, and the two vocalists were perfect choices to lace the track with their high-energy bars and rapid flows, as the pair bounce off each other flawlessly, building and hyping off each other throughout the duration of the track.

Mic Ty released a Jammz produced single titled ‘06 Wad3‘, a silky smooth offering that lets Mic Ty look inward, reflecting on his drive, likening himself to former Miami Heat player Dwyane Wade, who took the team to an NBA Championship in 2006 (hence the name of the track). Much like the NBA Star, Mic Ty recognises his own talent and believes himself to be of championship calibre, which he aims to attain with this release & future releases

Rounding off our list, GHS brings us rapid flows over a transcendent, trap/drill fusion themed instrumental on his latest track ‘Same Old‘. GHS raps about the unchanging nature of his life, but still thriving despite the monotony and managing to evolve as an artist. With promises of a visual soon, we’re anxious to see what GHS brings us next! 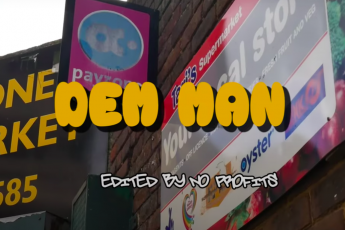 VIDEO: Squintz shares behind the scenes footage from his "DEM MAN" music video.

« Previous post
VIDEO: THIS WEEK IN GRIME April 10th 2021
Next post »
VIDEO: Keepin’ It Grimy sits down with Lethal Bizzle for first “What’s Man On?” episode