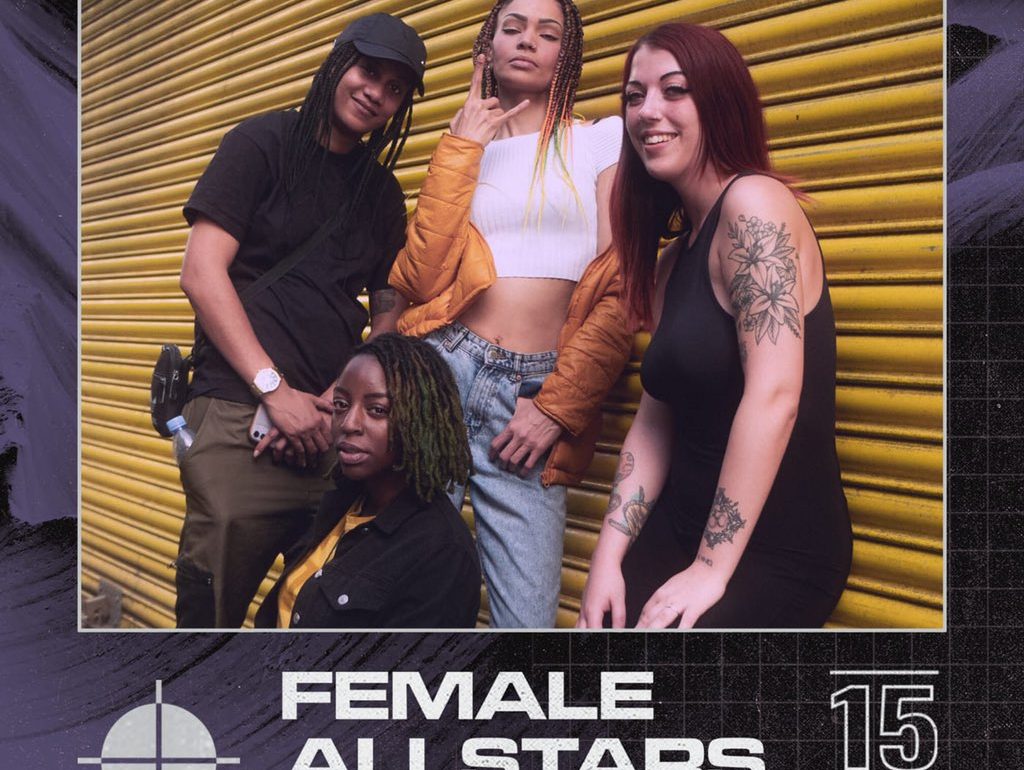 On an all-female lineup, consisting of Scar Duggy and Grime Violinist, Female Allstars along with their DJ Kaylee Kay supported Trillary Banks at Hootananny, Brixton, on 15th October.

The crew kindly invited Keepin’ It Grimy along to the show for an interview and to catch their first performance post-Covid restrictions.

Before the girls went on stage, Keepin It Grimy hung out with them backstage to talk all things music, Jme and group dynamics.

Here’s how it went…

KIG: How did it come about that you’re supporting Trillary Banks tonight?

Miz: We get hit up on our email for bookings. Max from Hootenanny got in touch with us and asked if we wanted to be a supporting act and we said yes straight away! Simple!

Frankie: They must have seen what we’ve been doing especially with the EP and that. Thought we were a great act to support, and we are.

Nyny: And yeah we just come outta lockdown! Let’s get our performing on. Dropped the Ep with Jme and we ain’t performed it yet…

KIG: As a Grime crew supporting a Hip-Hop artist what are you trying to show the crowd tonight?

NyNy: That females got sauce!

Frankie: And yeah versatility, because obviously we’re a Grime crew but we all do hip-hop and dabble in it ourselves, so of course we are going to support a fellow rapper.

KIG: You’re on an all-female lineup tonight. What message does that send out to the scene?

Frankie: Female unity. And that we can do as much as any guys.

KIG: What to Female Allstars represent?

Shocker: Yes I was gonna say that!

NyNy: We’re not scared to show what we’re about.

Frankie: Four forces shine together and show that females can do it together cause there’s a big stigma around that, so we’re trying to obviously prove that wrong. So far we have been.

KIG: Do you feel that female artists get the recognition they deserve?

Frankie: I think it’s moving into a time where…

Frankie: It’s GETTING there, you know what I mean.

NyNy: It’s better, it IS much better, but I also feel like unless you got big clout around your name, you’re unheard. It’s always the same females getting booked.

Frankie: There’s still a long way to go but I definitely feel like it’s moving in the right direction.

Miz: Spice it up a bit bruv, init!

Shocker: Not gonna lie, I put out about ten tunes this year. Show me something, do you get what I’m saying? So why is it always the same thing? We done a big fucking EP, why are we not headlining Eskimo Dance? Why? Why? Why are we not? Not horribly. But we work hard.

Frankie:  A lot of these people are actors and turn blind eyes.

Shocker: Yeah. And we work hard. And no nothing weren’t fucking free. We work for this shit. We put in so much fucking work behind the scenes and we run solo fucking careers. It’s hard enough running a solo career let alone running a fucking successful group.

Miz: And everything else we do on the sideline as well.

Shocker: People act oblivious. Even tonight how many Grime fucking MCs or Grime people did you see sharing that we was doing this big thing tonight. We fucking done a thing in front of thousands and thousands of people on a big bus in front of everyone. No one gives a shit. No one in Grime gives a shit. But then every minute they’re saying ‘support our females, support our females’. I’ll tell the truth, it starts at home init. We’re here, we want your help, we want your support, know what I mean? What more can we do before people say ‘you know what let’s open it up a bit’.

KIG: Performance opportunities have been sparse with the pandemic restrictions, how important is this chance to perform live tonight, for you all?

Miz: Do you wanna know the maddest thing? In rehearsal, we realised that everything we are performing tonight has never been performed live. Everything that we have worked on in the past year, two years we’ve never had the opportunity to do this. We’re performing 19 songs tonight and then our sets not even done. We’ve got more. Like, we’re ready, we’re here.

Frankie: We used to thrive off live performances but then Covid happened.

Shocker: We was on a roll.

Frankie: We’ve done a couple sets since then but yeah to perform is really good, obviously it’s been a long time and this is what we do.

Miz: This is what we do!

KIG: You’re performing tracks from your EP with Jme ‘What You Call Disss?’ what has been the reception towards the EP?

Shocker: We don’t have no PR campaign. We get on the socials and post it everywhere. inbox all of our people to share it about. That’s how we do it. And we got 100k streams. Jme don’t do tunes with anyone.

Miz: And Jme did not promote it once.

Shocker: At the end of the day Jme ain’t been on socials all year.

Miz: He made it his profile picture on Twitter.

Shocks: Yeah he made us his profile photo but he has not been on socials all year.

Frankie: So everything is from us genuinely pushing it ourselves.

Miz: Hella proud of that! Hella!

KIG: What do each of you bring to the crew?

Frankie: Do you know what its hard to say. Obviously, we’re all different.

Frankie: Yeah we’re all different yeah. And together it just makes such a vibe when we kind of all join forces together.

Miz: That’s always been our thing man- different flavours with different styles. When you put us together we’re like the best plate of food you’re ever gonna eat.

Shocks: I work the hardest!

Miz: Shocks, I will fight you bruv!

Frankie: We all contribute.

Shocker: Yeah that’s the good thing about it, is everyone is just not one thing. We’re not just MCs. Between us we could make you a video, make you artwork, fucking do the best PR campaign, give you confidence, teach you how to record, we can do everything between the four of us.

Miz: Everything is done in house.

Frankie: Between the four of us we have the skills to create a project.

Shocks: That’s why we wanted to do that FA studios to teach other females how to do things for themselves, how to do everything for themselves. ‘Cause, do you know what nobody tells you these things. I’ve been in music for a good 20 years. Guess what? 20 years ago there was PRS, guess what? It was a fucking secret. Nobody told me about PRS. It was a fucking secret mate. I could have been earning money for 20 years. Everything was a secret back then. Now everything is open and…

Miz: But that’s our game plan, to teach the next-gen how to…

Shocker: And this is the thing we need to teach. Because you can do everything yourself. You can literally do everything yourself. But no one don’t wanna tell you how to do things. And sometimes if someone sees you as competition then its like… And that’s the best thing about this group – None of us are each others competition. That’s the best thing about this group. If someone says to me why is there only 4 of you, and I’ll say because none of us see each other as competition and that’s the truth.

KIG: With only a few mainline Grime events around such as Grime Originals and Eskimo Dance, how important do you think it is for artists to looks for opportunities on mixed and diverse live ups both at live shows and raves?

Miz: The issue yeah, is not about artists LOOKING for opportunities. You could put yourself out there to a million and one people and it could do absolutely nothing. Then on a random one, you get an email one day that says hey do you wanna come perform at Hootenanny. And you say yes. You can do everything that you want but it’s not until it’s received that you get it back. We have been blessed. So fucking blessed to get the fans that we’ve had. And hopefully, they keep coming.

You just have to keep putting yourself out there. It reaches who it reaches, it touches who it touches that’s the thing. We don’t put music out for an audience, we reach everybody. You like us or you don’t init. If you like us book us. Emil us!

NyNy: We’re just gonna keep working and what’s meant for us will come to us.

KIG: What’s next for Female Allstars?

Miz: We do have an album coming out. It’s our debut album and it’s absolutely fucking insane. We’re not gonna speak on it because it’s exclusive…

Frankie: We don’t wanna give away the gems.

Miz: However, if you are here in Hootananny tonight, you’ll get some bits and bobs. We’re not putting a date on the album, it comes when it comes. Then after the album, it’s FA to the world!

If you haven’t heard the EP ‘What You Call Disss?‘ with Jme, Check it out below: 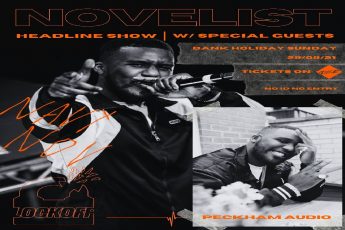 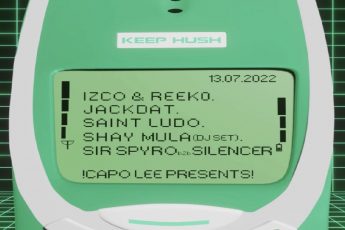